Turn the Ship Around!

A true story of turning followers into leaders 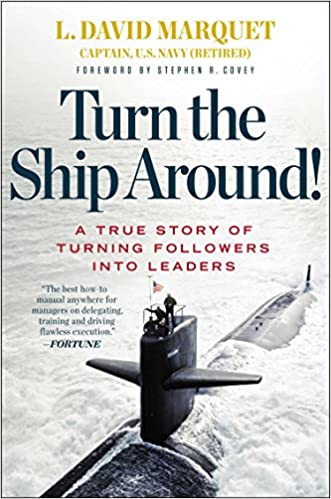 Since Turn the Ship Around! was published in 2013, hundreds of thousands of readers have been inspired by former Navy captain David Marquet’s true story. Many have applied his insights to their own organizations, creating workplaces where everyone takes responsibility for his or her actions, where followers grow to become leaders, and where happier teams drive dramatically better results.

Marquet was a Naval Academy graduate and an experienced officer when selected for submarine command. Trained to give orders in the traditional model of “know all–tell all” leadership, he faced a new wrinkle when he was shifted to the Santa Fe, a nuclear-powered submarine. Facing the high-stress environment of a sub where there’s little margin for error, he was determined to reverse the trends he found on the Santa Fe: poor morale, poor performance, and the worst retention rate in the fleet.

Almost immediately, Marquet ran into trouble when he unknowingly gave an impossible order, and his crew tried to follow it anyway. When he asked why, the answer was: “Because you told me to.” Marquet realized that while he had been trained for a different submarine, his crew had been trained to do what they were told—a deadly combination.

That’s when Marquet flipped the leadership model on its head and pushed for leadership at every level. Turn the Ship Around! reveals how the Santa Fe skyrocketed from worst to first in the fleet by challenging the U.S. Navy’s traditional leader-follower approach. Struggling against his own instincts to take control, he instead achieved the vastly more powerful model of giving control to his subordinates, and creating leaders.

Before long, each member of Marquet’s crew became a leader and assumed responsibility for everything he did, from clerical tasks to crucial combat decisions. The crew became completely engaged, contributing their full intellectual capacity every day. The Santa Fe set records for performance, morale, and retention. And over the next decade, a highly disproportionate number of the officers of the Santa Fe were selected to become submarine commanders.

This website uses cookies to improve your experience while you navigate through the website. Out of these cookies, the cookies that are categorized as necessary are stored on your browser as they are essential for the working of basic functionalities of the website. We also use third-party cookies that help us analyze and understand how you use this website. These cookies will be stored in your browser only with your consent. You also have the option to opt-out of these cookies. But opting out of some of these cookies may have an effect on your browsing experience.
Necessary Always Enabled
Necessary cookies are absolutely essential for the website to function properly. This category only includes cookies that ensures basic functionalities and security features of the website. These cookies do not store any personal information.
Non-necessary
Any cookies that may not be particularly necessary for the website to function and is used specifically to collect user personal data via analytics, ads, other embedded contents are termed as non-necessary cookies. It is mandatory to procure user consent prior to running these cookies on your website.
SAVE & ACCEPT

When you subscribe to this series, you will receive valuable information and insights from Mike about what it takes to build great teams. You are free to unsubscribe anytime!